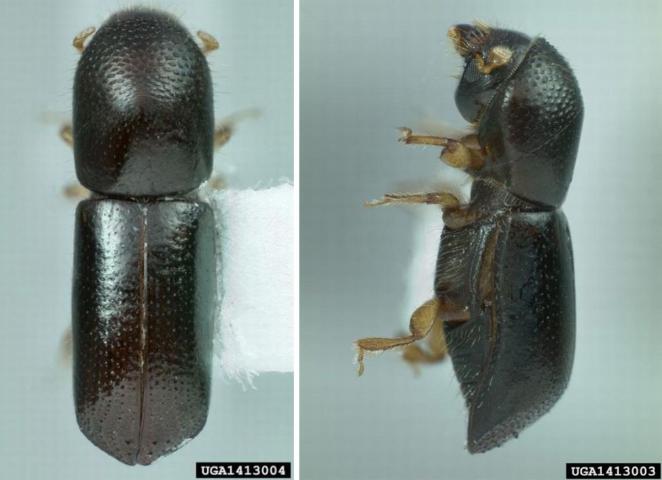 An invasive pest from Asia carries a lethal pathogen that can kill avocado trees. The redbay ambrosia beetle was first detected in Savannah, Georgia, in the early 2000s. This beetle carries a fungus that causes laurel wilt, an extremely dangerous pathogen that can be deadly to avocado trees. Recently, the threat of this pathogen has increased. Randy Ploetz, a professor of plant pathology at the Tropical Research and Education Center, says the redbay ambrosia beetle has introduced the fungus to other species of ambrosia beetles. Those species can now live off the fungus, which is bad news for avocado growers.

Ploetz believes the redbay ambrosia beetle arrived in the United States on wood packaging material. Now, 15 years since it was discovered, the fungus that causes laurel wilt has been found in nine other species of ambrosia beetles that are native to the United States. Ploetz’s research focuses on identifying which of those nine species will actually transmit the pathogen to trees. Some of the beetles simply live off the fungus, while others actively spread it to the trees.

Ploetz says the pathogen is rapidly spreading and making huge geographic jumps. This could be due to the transportation of dead trees and firewood that are infested with the pests, and therefore the pathogen. To date, the pathogen has been found in the Southeast and Texas. Texas is the westernmost state the pathogen has been reported in, but Ploetz believes it is only a matter of time until it makes its way to Mexico and California.

California is the biggest avocado producer in the United States. If the pathogen does spread to that state, Ploetz says it could cause some serious damage.

According to Ploetz, a colleague of his has begun to work on methods to resist the pest and the pathogen. This may include creating a new variety of avocado that has high resistance to laurel wilt. However, the creation of the new variety is extremely time consuming.

Until a resistance solution is reached, Ploetz highly recommends keeping avocado orchards sanitized to manage the pathogen and prevent it from spreading. The beetles are attracted to dead and dying wood. Once it is in the wood, it spreads the pathogen to the dead tree. Then, the pathogen is transmitted to the healthy trees through the roots. Therefore, Ploetz stresses the importance of removing and burning dead and dying trees as quickly as possible. If the tree is not removed quickly, it increases the risk of the pathogen infecting healthy trees.