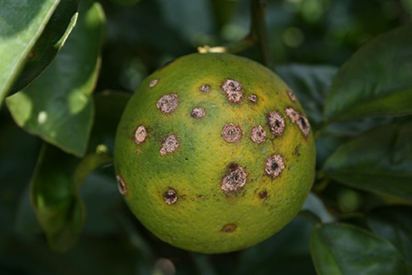 How citrus canker arrived in Alabama is still in question. What is certain is it is an issue the Alabama Department of Agriculture and Industries is determined to contain before it becomes a major problem, says Kassie Conner, director of the Auburn University Plant Diagnostic Lab during a recent webinar on the Alabama Extension Commercial Horticulture Facebook page.

“The first trees that were found infected were in a landscape, and the trees had been purchased about a year prior and planted in a yard. It had already spread to other citrus trees in that direct vicinity. When they traced it down to where the trees came from, the nursery that they bought the trees from actually had a lot of infected trees also. They’re thinking it may have come in on the plant material. This was in June,” Conner said.

“But since then, we’ve also found it in Mobile County. It may have come in on plant material or it may have come up from Florida. But it seems to be established right now. The Department of Ag is going out and surveying and they are destroying trees that are infected to try to limit the spread of this disease. We’re eventually going to be put under a statewide quarantine for citrus canker. Which means that you can’t move material out of the state.”

According to the University of Florida/IFAS, citrus canker is very economically damaging to the commercial industry. It causes defoliation, premature fruit drop, twig dieback and general tree decline. While it is easy to diagnose in the field, since it is a federally regulated pathogen, it has to be tested at a lab to confirm its positivity. It is highly contagious and spreads easily through wind-driven rain.

“Citrus canker has been a huge problem in Florida and Louisiana. It’s been found in isolated parts of Texas. I think we all realized that eventually it was going to come over here because the pathogen wasn’t going to stop at the border. But we hadn’t found it until this year,” Conner said.