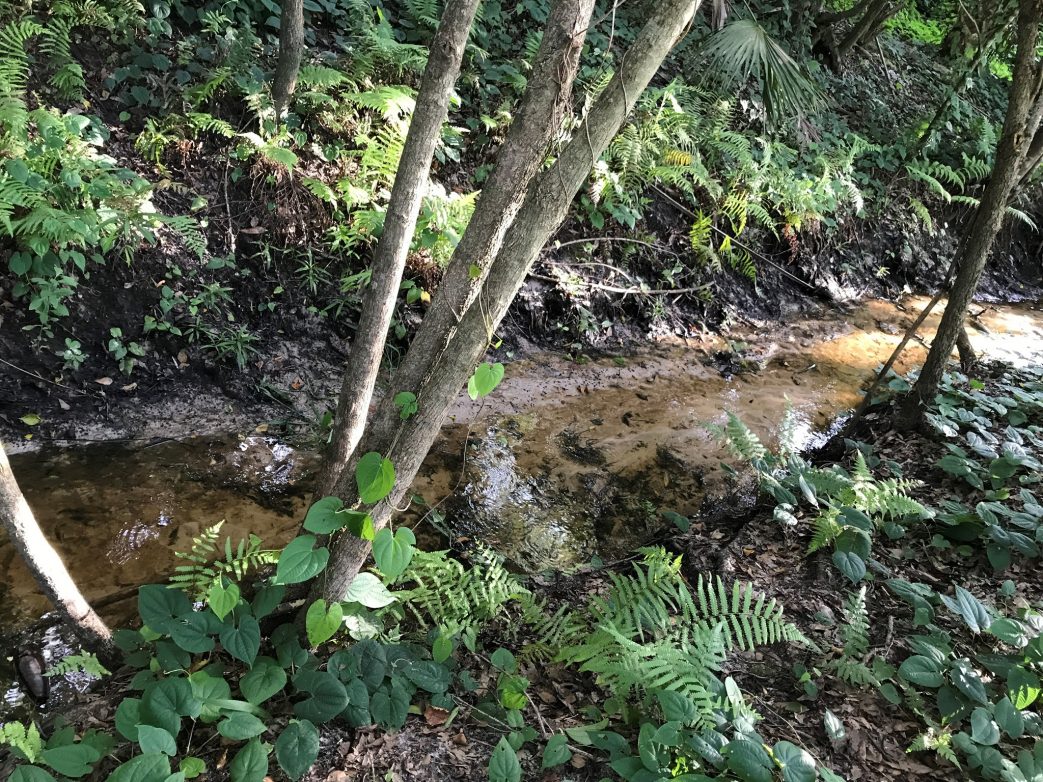 Thanks to the air potato beetle, Jim Selph can finally enjoy the creek that runs through his property. The creek used to be inaccessible because the dense air potato vines that had taken over the area. Photo by Jim Selph.

GAINESVILLE, Fla. — In Florida, air potato is a state-wide problem, but the battle against the invasive plant starts in greenbelts and back yards, according to scientists with the University of Florida and the Florida Department of Agriculture and Consumer Services.

Experts are calling on the public to join the Air Potato Patrol, a citizen science project that trains residents to identify and report air potato vines in Florida and the Southeast.

“If someone has air potato vines on their property, we want to get status updates on these plants — for example, are they growing and expanding or are they dying back?” said William Lester, Hernando County horticulture agent with the UF Institute of Food and Agricultural Sciences Extension.

“We also want to know if people see air potato leaf beetles on the vines. That’s because the beetle eats only this plant, and we want to know how many are out there seasonally, and how successfully they’ve been able to control the vine,” he said.

Air potato is a vining plant named for potato-like tubers called bulbils. The plant grows aggressively and can quickly overtake and kill other vegetation. The plant is currently found in 60 of the 67 counties in Florida, as well as in Alabama, Georgia, Louisiana and Texas.

About a year ago, Lester started getting calls from locals concerned that they weren’t seeing as many air potato beetles as they used to. Lester suspected that winter weather had hit the beetles harder than usual, leading to the decline in numbers.

Those calls showed that everyday people were a valuable source of intelligence in the ground fight against air potato.

In response, Lester contacted Chris Kerr, who leads the air potato beetle rearing program at the FDACS Division of Plant Industry facility in Gainesville, Florida. As the two discussed how they could get the public more involved in air potato control, the Air Potato Patrol was born.

Lester and Kerr collaborated on the videos and training materials that teach citizen scientists how to identify air potato and report on plant growth and beetle activity. Videos and more information on how to participate are available at airpotatobeetle.com.

“Anyone who wants to learn more about controlling this invasive plant, and has access to air potato on their property or a friends’, is welcomed to participate,” Lester said. “The data collected will be used to help better understand the timing and seasonal distribution for both air potato plants and beetles.”

Jim Selph, a retired UF/IFAS Extension Desoto County director and livestock agent, jumped at the chance to participate in Air Potato Patrol. Now a DeSoto County commissioner, he is still committed to controlling air potato because he knows it’s good for the environment.

But the problem is also a personal one. A creek runs through Selph’s property, and the area around it used to be engulfed in air potato, making the creek inaccessible. “Wading through those vines, that was something else,” he said. “I couldn’t get down to the creek to enjoy it.”

Now, thanks to the work of the beetles, he can. “The air potato vines are reduced by 40 or 50 percent, and each year it gets better.”

Residents with air potato vines on their properties can request beetles online.