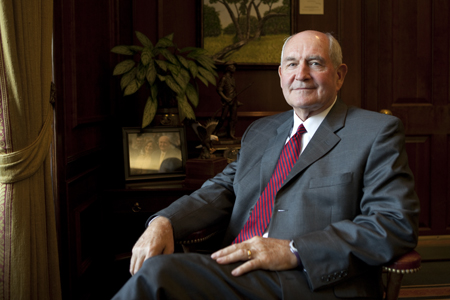 Renegotiation talks for the North American Free Trade Agreement (NAFTA) will enter round five in the coming weeks. So far, it appears the talks have not moved as progressively as some would like.

In an exclusive interview with AgNet Media’s Josh McGill, U.S. Secretary of Agriculture Sonny Perdue said he was “thinking out loud” when he brought up contingency plans earlier this week if the United States withdrew from NAFTA. Perdue said he is a planner and always likes to have a plan B. However, he feels that renegotiations will be successful and NAFTA will be reformed.

Perdue added that he has clearly communicated with the administration that pulling out of NAFTA could be detrimental to many agricultural industries. He is not recommending withdrawal by any means. “Right now, we’re on plan A and we’re going to ride plan A until it doesn’t work,” he said.

Perdue concluded his comments by saying he feels it is his responsibility as the secretary of agriculture to think of backup plans and consider alternative options in case the United States does withdraw from NAFTA. “It is my responsibility … and that’s what I’m doing,” he concluded.