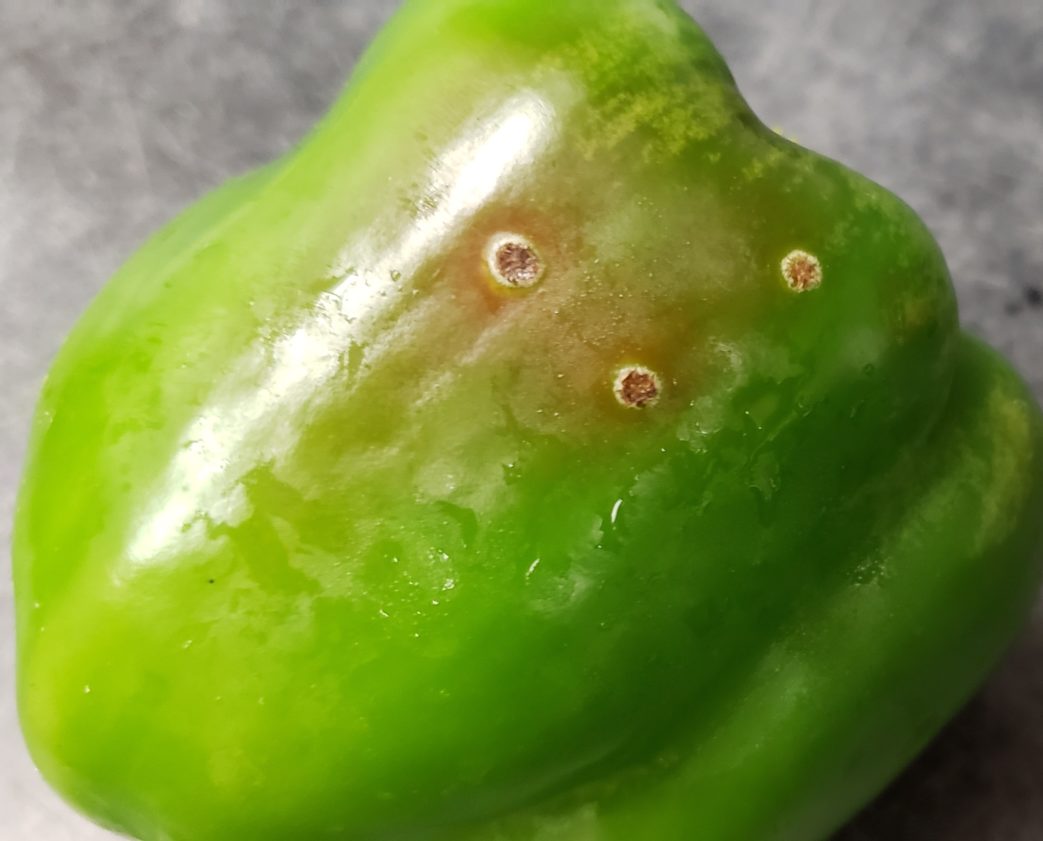 Bacterial spot of pepper is one of the most common and chronic disease challenges to pepper production. Infection can occur on the stems, leaves and fruit of the pepper plant.

SYMPTOMS AND SPREAD
Symptoms on the leaves start as small, water-soaked (dark, greasy-like spots) areas that are light brown at first and darken as the tissue dies (Figure 1). Lesions frequently will coalesce over large portions of a leaf. Leaf drop and extensive defoliation can occur even if plants are only mildly affected (Figure 2), causing reduced plant vigor and sunburn on exposed fruit. Symptoms on fruit begin as small, raised lesions that will enlarge and take on a scabby appearance (Figure 3).

Bacterial spot can spread quickly and cause significant damage to pepper production under the right environmental conditions. Warm weather and frequent rains favor disease development. The bacteria survive on seeds, and symptoms can manifest on seedlings within the transplant house.

Infected seedlings should not be transplanted in the field. Volunteer pepper plants, alternative hosts such as tomatoes or weeds, and infected plant debris play a role in survival of the disease in the field. Once the plants are infected, movement of the bacterial cells occurs during rain events, by dew runoff and by workers or equipment moving through the field when the plants are wet.

SPECIES, RACES AND RESISTANCE
Xanthomonas euvesicatoria is the primary causal agent of bacterial spot. Two other species, X. perforans and X. gardneri, are found infrequently on pepper but more commonly on tomato.

Surveys conducted several decades ago characterized populations of bacterial strains from pepper in Florida and North Carolina and found widespread tolerance to copper and the antibiotic streptomycin. The commercial agricultural formulation of streptomycin is currently labeled only for greenhouse use for control of bacterial spot of pepper. Copper-based bactericides combined with mancozeb are used for bacterial spot management.

RECENT RESEARCH
To better understand the current population of Xanthomonas spp. on pepper in Florida, surveys were initiated in 2019 to collect and characterize bacterial strains from the wide variety of peppers grown in South Florida production fields. Leaves and fruit with symptoms typical of bacterial spot were collected from farms located in Hendry and Collier counties. More than 500 strains were collected from a variety of pepper types, including bell and specialty-type peppers such as mini sweets, Cubanelle, jalapenos and many others over the course of three years.

The strains were then characterized to determine the bacterial species, pepper race and sensitivity to copper and streptomycin. The species of Xanthomonas was identified in the lab using molecular tools and additional tests. Race typing was done on pepper and tomato cultivars carrying specific resistance genes. Bacterial strains were tested for sensitivity to copper and streptomycin on Petri plates containing agar amended with copper sulfate or streptomycin.

As suspected, the great majority of the strains recovered were found to be X. euvesicatoria. Only a small number were identified as X. perforans. The predominant pepper races were 1, 3 and 6, while four other races were detected less frequently. The races were found to vary according to the original farm from which the plant samples were collected.

The majority of strains tested were copper sensitive; only about one-third were copper tolerant. Of the entire collection, only five strains were identified as streptomycin-resistant, probably reflecting the natural occurrence of such strains and the limited use of streptomycin. Copper tolerance was also found to be primarily associated with plants grown on farms with a history of using copper.

The preliminary results from these pepper production surveys offer insights into the current population of the bacterial spot pathogen. Disease management through variety resistance and judicious use of chemical applications can benefit from having knowledge of key characteristics of the pathogen population and its diversity. In addition to these surveys, a multi-state project is underway evaluating plant resistance, novel control methods, and the use of commercially available biological products and other materials with the goal of enhancing sustainable management strategies for bacterial diseases on pepper.

Acknowledgment: This work is supported by the Specialty Crops Research Initiative project (grant No. 2019-51181-30010/project accession No. 1020301]) from the U.S. Department of Agriculture’s National Institute of Food and Agriculture.

Pamela Roberts is a professor, Jeff Jones is a distinguished professor, Erica Goss is an associate professor, and Aastha Subedi is a graduate research assistant — all with the University of Florida.